I’ve developed a new habit of compiling a box of photos of my recent work, as well as favorites that I’m in the mood to share, and then showing the photos to friends as well as to casual acquaintances.  I love sharing my photos and I’m continuously pleased that other people seem to enjoy my printed images – that my experiments aren’t so esoteric or feeble that people fall over immediately with boredom.  I frequently tell people that I’d love for them to take a complimentary, signed 8.5" x 11" print of their choice for display because I am happy that another of my photos will be out in the world for people to engage with.  Earlier this week I went through some photos with some friends in my painting class and the first two people who looked through my collection of recent work both singled out my new “Wildflowers” image as the one that they wanted.  So with that arsenal of market research to go on I decided to base my first blog in quite some time on the making of “Wildflowers”.

The story of how I found this scene is the pretty much the same story I might tell about most of my images.  I was walking down an alley with my Border Collie, Hazel, when suddenly I found a dumpster that might be a subject for a photo.  In this case, the dumpster was nearly empty of trash, so rather than taking a photo of the outside of the dumpster and working with scratches, rust and reflected light, I looked for a composition that might exploit the many marks and stains on the inside walls that had accumulated over time as a result of people dropping in all manner of rubbish. This kind of scene, with relatively large area of intricate marks, presents an opportunity to get farther away from the surface and capitalize on the random complexity that often suggests different things to different viewers.  More typically, I compose close-up detailed scenes from the surfaces of wood or metal exploiting the details that, while randomly formed due to the play of the elements and environment, appear to me to suggest meaning or intention.  I constantly appreciate the graceful lines and the complexity of these random patterns, as they vastly exceed the capabilities I can ever hope to cultivate in order to put down such intricate, unselfconscious, and layered brush strokes with oil paint.  That is one of the "tricks" of my approach to art; I leave the hard work to nature and chance and just steal the many random images that are all around for the taking.  For me, that is infinitely easier than confronting a blank canvas and figuring out how to realize a painting. It is less common that am I able step back from a subject, as I do with the interior dumpster shots, and find a scene with elements that tie it together. So, this kind of shot is nice when it works.

The “mountains” in the background of this wildflower scene were, I believe, areas of the dumpster that had been dented from the outside and were slightly pushed in.  The image required only minimal cropping and then filtering to bring out the incipient value relationships which are modestly discernible to the eye but that the camera sensor is capable of gathering in great detail.  I was able to rest my forearms on the upper edge of the dumpster to allow for excellent stability in lieu of a tripod in relatively low light (ISO 12800, f11, 1/20).

Here are some more examples of interior dumpster photos at an approximate distance of the far wall of the dumpster.  While the results are always quite different, you may seem some overall similarities especially when compared to the majority of the close up work that I do on the outside of dumpsters. 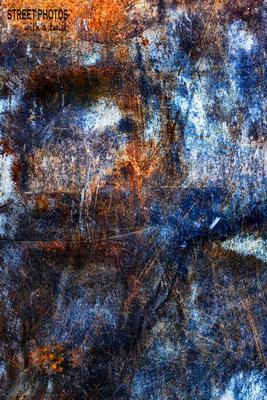 I've noticed that when I develop an image that I find pleasing and which suggests a specific interpretation or meaning to me, others tend to find the image pleasing too, but often for totally different reasons and with completely alternative interpretations. This phenomenon intersects with many other issues, including visual perception, aesthetics, and questions of subjectivity and consciousness, so I'm going to leave development of those topics for a future blog.